Along with the more ubiquitous Karei Raisu (curry rice), Hayashi Rice, is a family staple in the Japanese home. Much like mac & cheese in the US, Hayashi Rice is a meal that kids love, and one that evokes childhood memories for grown-ups.

Since most households use “instant” roux blocks (as is the case with Japanese curry), Hayashi Rice is a simple comfort food that doesn’t require a lot of fuss. But as good as the roux blocks are, my from-scratch method doesn’t take all that much longer, and the results are definitely worth the few extra minutes to add spices and make the roux. Plus, it’s all natural without MSG or other weird ingredients.

Although this dish has been around for less than 100 years, no one really seems to know where the name comes from. A common story is that it comes from the western term “hashed beef”. While I know that Japanese people have a tendency of mashing together English words, I just don’t buy it. Hashed beef would have more likely turned into something along the lines of “Hashibeefu”. But there’s another theory that the name comes from someone named Hayashi, which seems a more plausible explanation since Hayashi is a pretty common Japanese name.

Regardless of it’s origins, it’s a spiritual cousin to karei raisu that’s somewhere between beef bourguignon and beef stew. With a dark luscious sauce made with caramelized onions, red wine, tomatoes and demi glace, it’s rich and full of flavor. The roux thickens it giving the sauce a gravy like consistency that envelopes the tender beef, onions and mushrooms.

If you happen to end up with leftovers, the sauce is fantastic served over omurice (an omelet with fried rice in the middle). What I usually do is brown some garlic in butter then fry the rice, then make an omelet with an egg or two that I stuff with the garlic rice. Heat up some of the Hayashi and pour it on top and it’s pure heaven. 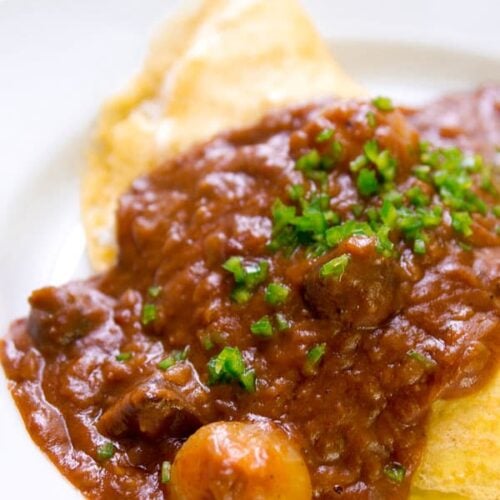 Recipes in your inboxDon't miss out SIGN UP!
Course Entree
Cuisine Japanese

What do you think?49 Cancel reply