This vegan “panna cotta” was inspired by a recent dinner at Kajitsu, a Japanese restaurant in NYC that specializes in shojin ryori. It’s a style of cooking developed by buddhist monks that uses no meat or fish.

As you step down into the restaurant, the pace of life seems to slow down before your very eyes. The pleasantly lit interior reveals a long solid timber bar along with a dining room furnished and trimmed in traditional Japanese woods. Everything from the understated decor to the cedar-like smell in the air will convince you that you’re in an old home in Kyoto, rather than a basement level East Village eatery.

Each course is a perfect balance of subtle flavours and colors allowing you to taste the quality of each ingredient without being too austere or simplistic. Watching Chef Nishihara behind the bar is like watching a sculptor working with clay. The attention to detail even carries over to the carefully selected dishes that the food is presented on, some of which are over two hundred years old!

For dessert we had a blueberry kinton filled with red bean paste. Kinton is a dense dumpling, traditionally made from sweetened chestnuts, sweet potato or beans. In this case, Chef Nishihara added blueberries, an unexpected combination that worked remarkably well. The whole meal was great, but I found myself contemplating the juxtaposition between the tart floral blueberries and the creamy bean paste during the entire walk home. This contemplation soon turned into a craving which is how I came up with this red bean “panna cotta” with blueberry sauce.

I put panna cotta in quotes because it has no cream in it and the texture is quite different due to the red bean and use of kanten instead of gelatin. If you’re looking for a satiny smooth traditional panna cotta, you may prefer this one, or this one (although neither are vegetarian)

Kanten_ (agar agar) is a gelling agent common in Asian cooking that’s derived from seaweed, which makes it vegan friendly. The resulting gel isn’t the same as gelatin though, with a firmer more delicate gel that’s less resilient under pressure. If you can live with the slightly different texture, it’s a great substitute for gelatin in desserts ranging from marshmallows to fruit jellos. 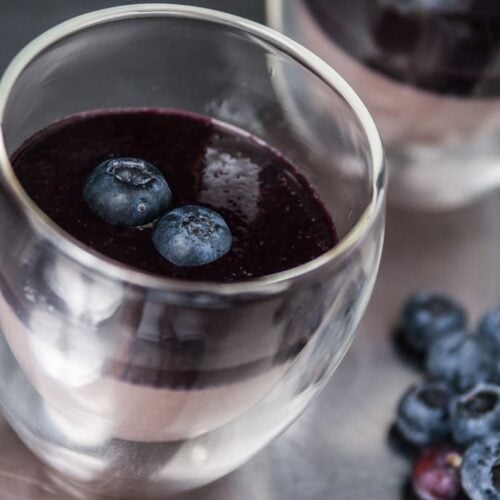 What do you think?71 Cancel reply